The security of the RSA cryptosystem depends on the hardness of the integer factoring problem. In general this is a hard problem for which no fast algorithms are known. More precisely, given a natural number \(N \le 10^n\) there currently does not exist an algorithm that would for any such \(N\) finds all its prime factors in time polynomial in n.

In hardware implementations of BCH decoders, error location is bottleneck, i.e. finding the error-locator polynomial and afterwards, the roots of the error locator polynomial. In high-density optical transmission, one would like to be able to correct up to 5 errors as fast as possible. In this project we will consider the following question:

How can we perform decoding for a 5-error-correcting BCH code as fast as possible?

Such expressions are too lengthy in general, but if the number of errors one needs to correct is modest this is more feasible.. To find the roots of the polynomial of degree 5, the strategy is to use suitably chosen transformations to bring any given polynomial in a standard form. Tricks similar (but algebraically more interesting) to completing the square are generalized and used for this purpose. Afterwards a strategy will be developed to solve the remaining standard cases, among others using table lookup for special cases. 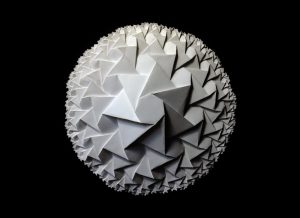 What set of points can become known by a finite sequence of exact folds?

This question is similar to classical geometric questions such as “Using only compass and straight-edge, can you double the square or trisect an angle?”. To answer it, one delves into beautiful algebraic theory initiated by Galois.