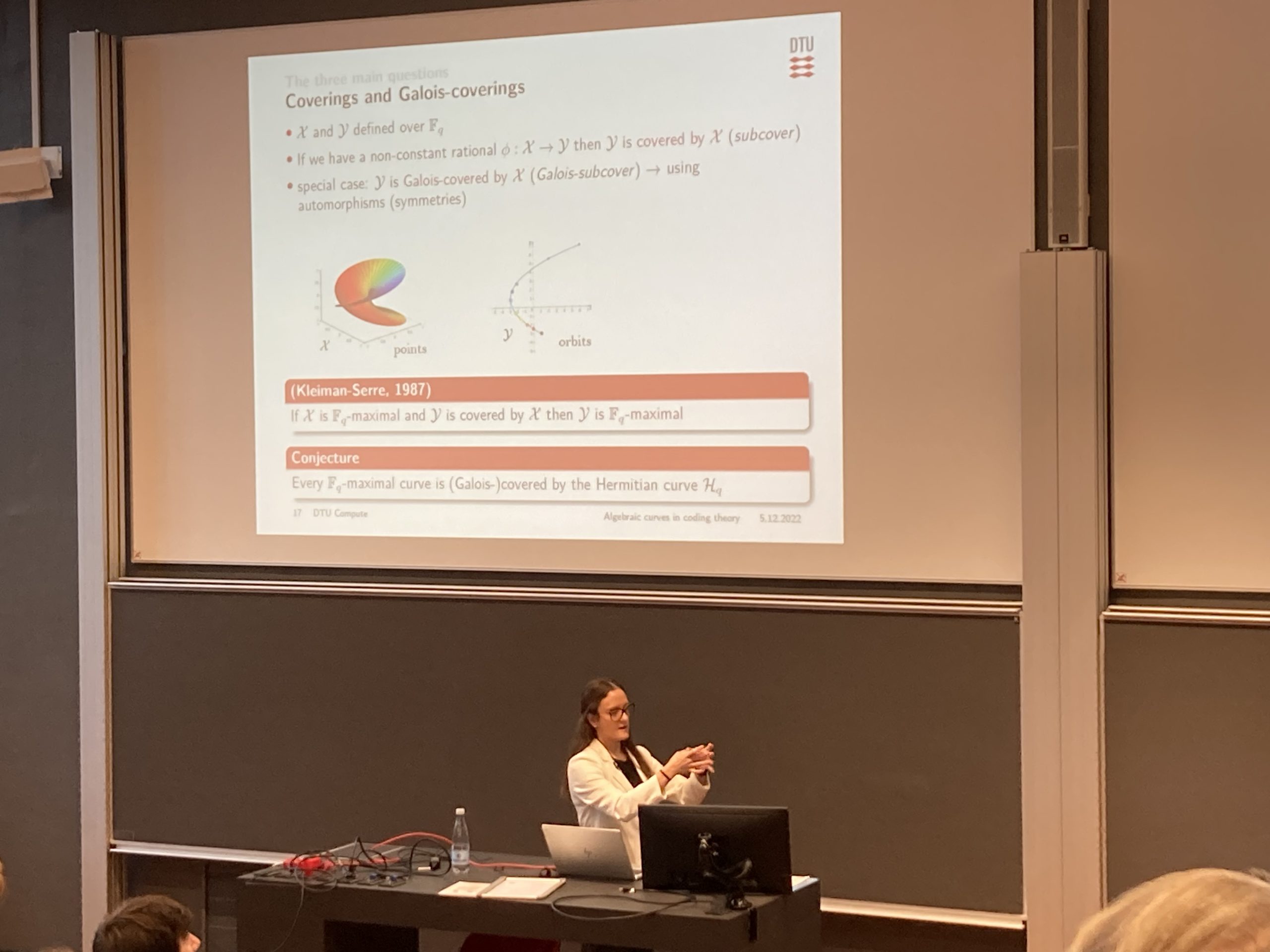 Today Ph.D. student Lara Vicino has given an online talk as part of the series of on-line seminars: Galois Geometries and their applications – Young seminars (organized by Department of Mathematics and Physics – Università degli Studi della Campania “Luigi Vanvitelli”). She talked about recent results on Weierstrass semigroups at points of a maximal curve with the third largest genus. Such curves are of particular interest in coding theory since they give rise to excellent AG codes and fast decoders are known for such codes. The work is joint with Peter Beelen and Maria Montanucci.

This and next week, the algebra group will host Vincent Neiger as a visitor. He previously was a postdoc in the algebra group, but now is an Associate Professor (Maître de Conférences) at Sorbonne University, Faculty of Science and Engineering. Vincent is an expert in computer algebra and has put his name to various very fast algorithms. We look forward to working with him!

Each year the Ph.D. school of DTU Compute organizes a Ph.D. bazar, where among other things Ph.D. students can present their work. Ph.D. student Lara Vicino presented her work with her supervisors on the Weierstrass semigroups of maximal curves and illustrated the use of numerical semigroups in general. Here you can see a picture of her in action today.

In the period 13th June till 3rd July, the algebra group will be visited by Prof. Sudhir Ghorpade (IIT Bombay) and Assistant Prof. Mrinmoy Datta (IIT Hyderabad). The goal is to continue the study of a famous class of algebraic geometry codes, the projective Reed-Muller codes.

Today, Grigory defended his Ph.D. thesis successfully! After giving an excellent presentation on his work, he answered various questions from his opponents. During his Ph.D. Grigory obtained various results on computational aspects of algebraic geometry (AG) codes, including results on encoding and decoding such codes. The results include decoding any AG code very efficiently, matching and very often improving preexisting decoders.

We would like to acknowledge the support from The Danish Council for Independent Research (DFF-FNU) for the project Correcting on a Curve, Grant No. 8021-00030B. Their support made Grigory’s Ph.D. project and the obtained results a reality.

Congratulations to Grigory with obtaining his Ph.D.-degree!

Yesterday, Grigory Solomatov handed in his PhD thesis “Computational Aspects of Algebraic Geometry Codes”. We would like to congratulate Grigory with this! His PhD defense is planned to take place on the 16th of December.

Grigory’s PhD was financed by the DFF-FNU project “Correcting on a curve”. Grigory will stick around a bit longer, since it was possible to hire him as a research assistant till the end of the year.